The QCC adopts the custom of giving poems as gifts on St Nicholas Day. 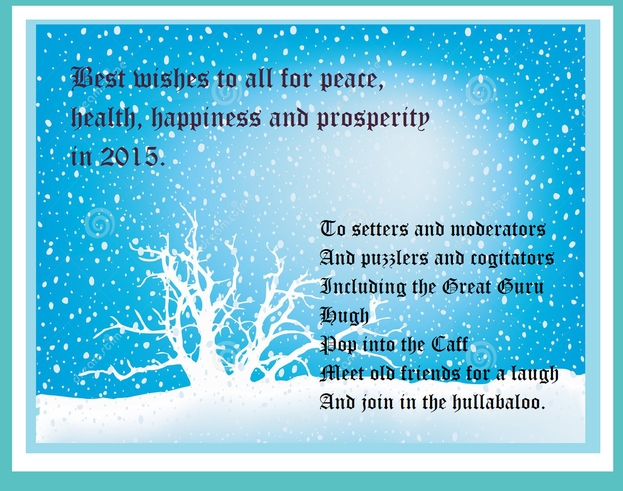 
Splotheration, it's winter after all.

Raked up golden yellow drifts of Flowering Currant leaves yesterday from our one Landlord Shrub, then took pity on the Northern Branch's garden-in-transit which is about to face Crumpetal's hilltop freeziekins.
Large empty pots retrieved from a skip, popular with the recovering vertebrae for being lightweight, and with some remarkably large colonies of woodlice and spiders, now adorn the front yard, where southerly light keeps going right through solstice. They're jackets holding the smaller terracotta ones, cherished Mediterranean herbs inside, thermal layers of dry leaves in between. By next spring all will be planted out we hape. The insects won't hurt the herbs.

The special Vlad Crimble wreath is germinating from a found base, a binned heart-shaped corn dolly i & i decided was still wired well, plenty of mileage left in it. On our evening constitutional through the Cem it looked suitably stained with the aftereffects of a long, gadabout midsummer. First the kitchen staff give it an ineffectual but ritualised wash and bleach in the single hour of sunlight we are forecast this weekend.
Chef has a few treats to affix and the Puzzle Pals offerings will be added over the coming fortnight, until the entire thing is fit for a photograph. A packet of florist's wire & the archive dexbox from last century have been located, possibly a few of those weeny old angels and some bauble / ribbon combo, plus twigs of fragrant bay and rosemary threaded in. The only obstacle to Candlebra's festive Welcome display is the plastic on the temporary Landlord Frontdoor - a problem solved with one of those bathroom sticky sucker hooks, if we can find a way to persuade it to stay put. Alternatively hang it inside the plate glass window, the Committee will be deciding in time for Christmas Eve. Just so long as we keep emitting the right signals, eh.


Have a Sinterklaas offering in the form of a dramatic monologue (suitably heroic!)

The War of the Words

As I walked along the darkened street
one night, who should I chance to meet?
My own worst enemy who laughed and said
that by tomorrow I would lie cold and dead
unless I left town. I laughingly replied that I
was not a craven wretch to turn and fly
because he told me. He took me by the neck
and said I should not doubt, he would wreck
my life and that our town was not big enough
for both of us. I shook him off, such stuff
I said would not frighten me. I would meet him
at dawn, when I would fight him and defeat him.
And so as the sun was rising I was at the spot
we had chosen for our encounter. I was not
afraid for I had chosen my weapon well, and
I doubted whatever he would have in hand
could win. Whatever insults he would fling at me
I could better with my Chambers Dictionary.
The outcome was inevitable. My opponent fled
and I went home to have my tea and toast in bed.

Here is my Sinterklaas Fest gift. It's not as classy as Lidell's, but .....

It's the 5th of December
and how well I remember
buying the Guardian just for the crossie,
but now I'm online
and the company's fine;
not cliquey, not snotty, not bossy.

I'd like to say "Ta",
for the comments so far
have been welcoming, kindly and witty.
I love all the bother
put into the Splother
and like reading the odd little ditty.


The Journey To The Caff

A cold coming we had of it,
Just the worst time of the year
For cleaning the gutters, and so many gutters:
The roof so high and the weather sharp,
The very dead of winter.'

And the camel galled, sore-footed, refractory,
Lying down in the snug.
There were times we remembered
The summer buttons with links, bold and italics
And the silken floozies bringing buns, splothka and Black Sheep.

A hard time we had of it.
Without our buttons
At the end we preferred to cheat,
Splothering in snatches,
With the voices singing in our ears, saying
That this was all folly.

Then we came to a caff with Mobian strips over the lintel,
And six doofahs by an open door ,
Next to the motor cycle helmets,
And some chocolate jelly cake
And chestnut stifado

The place; it was, you may say, extremely satisfactory

Plum(p) Pudding should contain some money
I find that concept rather funny
This fat and fruit filled final course
Served with flaming brandy sauce
Is already far too rich for me!

A hastily constructed contribution to the Sinterklaas Fest :

We open the paper
Or turn on the computer
With eager anticipation
At first we rejoice
The crossword seems nice
But then comes the ag(grr!)avation

We tear out our hair
We curse and we swear
We lose all sense of proportion
We Czech and we cheat
We threaten to beat
The Setter to total damnation.

But when all’s done and dusted
The crozzer’s completed
We sit back with some satisfaction
And head for the Caff
All ready to quaff
Splothka - without moderation!


Ode to the QCC

Well I thought I'd found a place
Perched up in a Beech tree
But a squirrel start to hassle me
Said it was his Conservatory
So I asked him about property
And he invited me to Tea
Said the tree was called "Eat Me"
Told me I should overlap
Told me I should integrate
Said we must live in harmony
Some of us under the tree
And some of us in the tree
And as long as we are free
I hope that we can overlap
I hope we can integrate
You in your tree…..

And me out of mine

We created this Caff, this ideal place
where everyone is fulfilled, often overjoyed.
Where everything is possible, everything allowed
Where Splothka, kindness and wit all have their space

Some, miffed to find that we had what it took,
called us a clique, but those with nous
joined in this caff that works worldwide.

We’re comme il faut, in anybody’s book,
And welcome guests; for us, it’s open house.
We love this place, we are full of pride

Sinterklaas to the Caff did come,
they gave him schnibbles and tots of rum.
He laaughed and praanced and jokes did tell,
and all agreed, the night waas swell.

But vagaries wild, for this expat child
made her dongle die and the flitternet fry.
So greetings late, with lots of cheer
spekulaas, CAKE and Black Sheep beer.

Will come again another year

love and peas and baby bok choy to all!

Here we stand in house and hall,
Round the fire when darkness calls.
Frosty singing in the cold
Holly green and garlands gold.

Making songs that touch our lives
Bands of brothers, sons and wives,
Different people, still the same,
Gathering round the Yuletide flame.

When cruel winter dulls the soul
Pass the spicy Wassail Bowl,
Drink to those who love to sing,
Raise a glass to the Solstice King

Winter stars dance in the skies
Life and love shine in our eyes,
Through sleet and snow and hail and rain
We’ll sing the seasons round again !


I thought of this yesterday (I'm an archivist rather than a creator), but decided twice in one day was too much. Still, I like this version better (and have marginal connections with some of the participants).


It's nearly Christmas
We talk of who will get the tree
The local garden centre has been let down by its supplier
Waitrose looms
For everything
We walk and welcome the first hard frost
Because the sky is just too blue
For now
Three deer rush past us
Startled by the black Labrador
Not by my headlights this time
A glass or two at the cosy inn
And pesto linguini with fresh spinach
The young blonde barman is six foot
And wearing a fairisle sweater ....with red reindeers
Tasteful mind
There are no bikes on the track, so we walk ....freely
Thank Goodness they are all shopping today
The elderly lady at the bus stop in the blue fairisle hat plus walking poles
Says its too muddy
We risk ourselves to the traffic
And then set fire to the house
It's warm
I read the QCC comments and think
I'm lucky
Shite

And starrock is ACE at choosing Christmas cards. 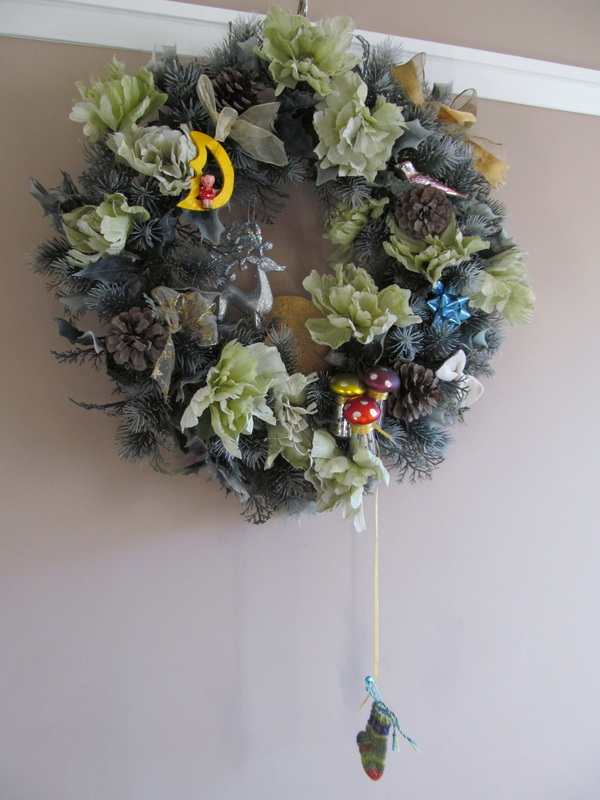