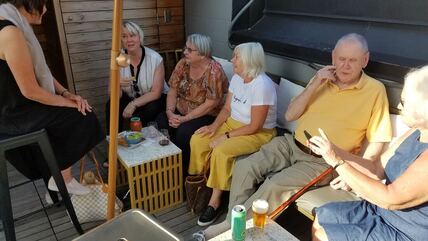 The first Canadian QCC gathering took place in Toronto, in August 2019.  Here is an account of the gathering by ChrissyK
In May 2019 RubyAnne started a thread on the subject of QCC gatherings.  Subernoj commented on how you need to have the courage to put your hand up and that struck a chord with me.  I had just arranged a trip to Canada in August to visit my former hometown in Ontario.  I first discovered the QCC when I was living there back in 2010 and I knew of several regular posters living nearby.  So, I put my hand up and suggested a get-together.  I was prepared to be met with a wall of silence so imagine my surprise and delight when Subernoj himself replied that he was going to be in Toronto at the same time and was up for a mini gathering.  To me that was the equivalent of Bob Dylan turning up to play the Isle of Wight Festival and, sure enough, replies started coming in.

Spanishscot acted as Postmistress General and put us all in touch with each other and we were up and running.
The nerves kicked in as the day approached but I comforted myself with the thought that we were all probably feeling the same way.  I took my good friend, Renate, with me for moral support and as we arrived at The Beverley Hotel we were met by DunCanOn who welcomed us warmly and took us up to the roof patio where – in true QCC style -  cocktails were in full swing.

I have to say, I felt at home straight away.  We were introduced to Ostrakon, AutumnalD, DruidPriestess and Mrs DunCanOn.  Soon we were joined by Susan Hancock and her partner, Paul, and Cinnamoncrumbs.  There was so much to talk about and thoughts to share but soon word went round that Mr and Mrs Subernoj had arrived!  Subbie himself came to say hello.  They had been on a sightseeing tour all day and must have been exhausted but after a brief moment to get their breath back they joined us at the Peter Pan restaurant for dinner.

The conversations carried on easily over dinner and as I looked around the table everyone seemed so familiar to me – as if we had known one another for years. At some point Subbie got up and started handing round leaflets and with a gulp I realised it was the QCC Song!  I hadn’t explained this part to Renate as I hadn’t thought it would crop up, public singing not being something I normally take part in.  After a few tentative starts, Susan Hancock started it off properly and soon everyone was joining in – I had an excuse for my poor participation as I thought I ought to record it for posterity.  We all signed each other’s songsheets and before we knew it, it was time to say goodnight, as dear Ostrakon often says on the forum.
​
Promises were made to keep in touch and wishes expressed to do it again soon - and then it was all over.
I would do it again in a heartbeat and I send my thanks and love to the rest of the Gatherers who also put their hands up on that day.


Here are some pictures of the gathering:

(Click on the first picture to start slideshow.  You can pause any picture at any time.)

And here they are, singing the QCC song